All photos courtesy of Aston Martin 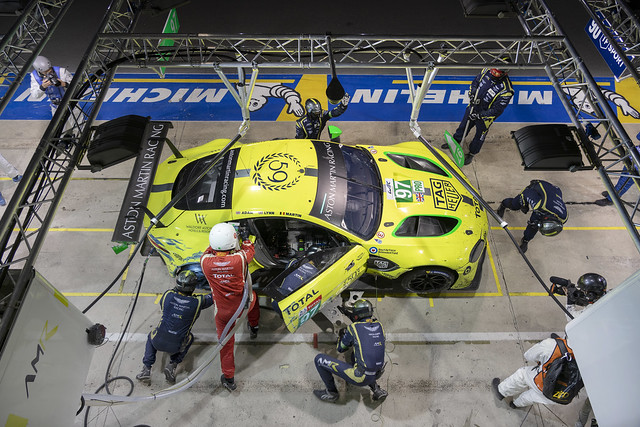 Three-times 24 Hours of Le Mans class winner Darren Turner experienced the full range of emotions during the 87th edition of the world’s most famous endurance race at the Circuit de la Sarthe in France last weekend.

The works Aston Martin Racing driver, competing at Le Mans for the 17th time and making his 15th consecutive start for the British luxury sportscar manufacturer, went into the race with high hopes. But these were ultimately dashed when his #95 Aston Martin Racing Vantage GTE was crashed by Danish team-mate Marco Sørensen during the night.

Ironically it was Sørensen who had raised the expectations of the #95 crew, which also includes Denmark’s Nicki Thiim, by setting a blistering GTE Pro class pole position at the beginning of the final two-hour qualifying session on Thursday evening.

“The build-up to the event was positive,” said Turner. “It looked like we had a car that was in the ballpark during testing, and in the practice sessions, I was very happy with my pace.

“The lap that Marco put together at the beginning of Q3 was exceptional and he didn’t have any traffic to hold him up either. What it did mean was that for the rest of that two-hour session we had to hold tight and wait and see if anyone could topple us off the top step! Each manufacturer showed they had the potential to do it but none of them had a clear free lap, but we could see from their sector times that the race was going to be very close and competitive.”

Having secured pole the team was eagerly anticipating a competitive fight at the front of the class when the race organisers decided to tweak the Balance Of Performance – intended to equalise the class – the night before the race.

“It was a big surprise,” said Turner. ‘The late Balance Of Performance change effectively lost us around 1.2s per lap in horsepower. With qualifying being so close, it was a complete curveball that wasn’t expected or, indeed, required.

“So we went from knowing it was going to be a competitive race to thinking we might not have the pace to fight at all. So all the excitement and jubilation of Thursday night soon turned to frustration on Saturday.”

Thiim led the early running in the race as the Vantage GTE sat at the front of the field for 30 minutes, but ultimately the changes to the car’s performance rendered it powerless to fend off the opposition. And this coupled with a sequence of small issues tumbled the #95 down the order

“Nicki made a great start, but it became apparent that our straight-line speed wasn’t on a par with the others,” explained Darren. “We had to trim the car out to try and recover some of that speed on the straights and that was detrimental to our braking and cornering capabilities. That had a negative affect on the tyres which gave us a higher tyre degradation. By the second hour we knew we were in for a tough race.”

Sadly though things got worse when first Alex Lynn crashed the #97 Aston Martin Racing Vantage GTE in the ninth hour of the race, and then 20 minutes later Sørensen had a race-ending accident at the high-speed Indianapolis corner.

“Marco’s accident was huge and it’s a testament to the team and the strength of the car that he was able to walk away with some minor injuries.”

“Having done this race so many times, you know you will have weekends like this that you just want to forget because they throw everything at you. But these weekends also push you to the max in terms of problem solving and that builds resolve within the team and improves our ability to dig deep for next year.

“We just have to take the learnings and do a better job when we come back in 12 months’ time. The car is capable of winning and so are the drivers.”